The teaching of Paul is so clear, that we could locate Mt. Sinai by saying: Mount Sinai is located in the land where Ishmael lived: Midian

A. Arabia in the Bible is Modern Saudi Arabia:

5.      "Now Abraham gave all that he had to Isaac; but to the sons of his concubines [Hagar], Abraham gave gifts while he was still living, and sent them away from his son Isaac eastward, to the land of the east." (Genesis 25:5–6)

B. Josephus said that Hagar and Ishmael lived in Arabia Felix (Saudi Arabia) 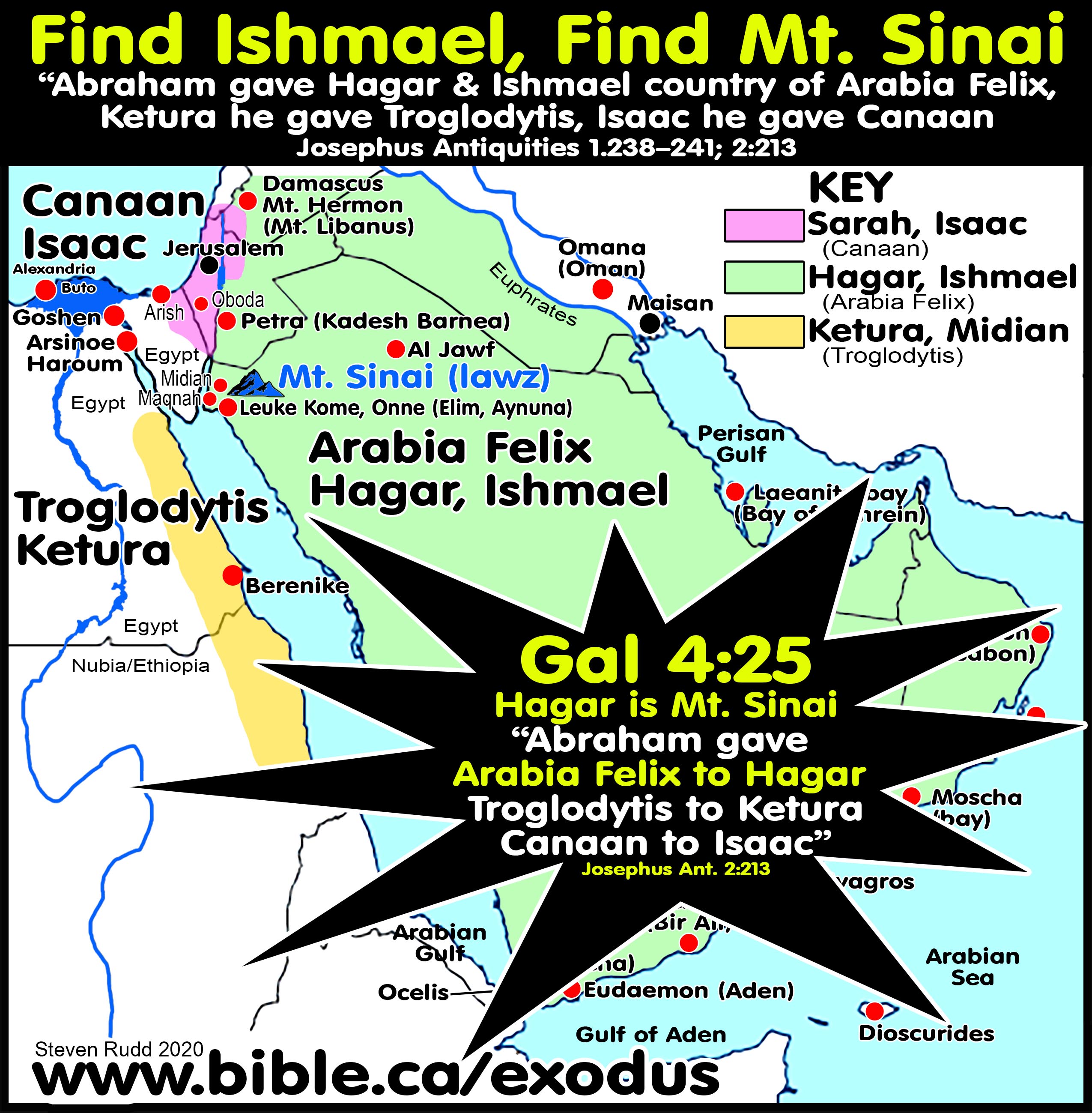 a.       Scripture says that Ismael settled in the Wilderness of Shur which is in Midian.

b.      According to Josephus, at the time of Abraham, Ketura’s son Midian settled in Troglodytis, which was universally defined by other ancient geographers, as the western shoreline of the Arabian gulf in Egypt and Ethiopia.

c.       The three distinct geographic areas outlined by Josephus which correspond to one of Abraham’s wives marks Mt. Sinai in Arabia Felix.

2.      Josephus defines Arabia Happy as where Hagar and Ishmael lived and where Mt. Sinai is located:

b.      Abraham’s children through Ketura and Hagar took possession of Troglodytis, and the country of Arabia the Happy [Arabia Felix], as far as it reaches to the Red Sea.” (Josephus Antiquities 1.238–239)

a.       Josephus tells us that originally, Ketura’s sons, including Midian, had settled in Troglodytis and Hagar’s sons including Ishmael, had settled from “Havalia to Shur” [Wilderness of Shur] in Arabia Felix.

b.      Scripture tells us that in 1899 BC Joseph was sold to the Midianites/Ishmaelites, who had become one tribe (likely through intermarriage).

d.      Josephus is the only ancient geographer to say that Midian at the Wilderness of Shur, was the land of Troglodytis because he understood that originally, all the sons of Ketura had located near the Egyptian, Ethiopian border on the opposite side of Arabia Felix but that Midian moved back to join tribes with Ishmael in Shur.

4.       Josephus identifies three distinct geographic areas (Canaan, Arabia Felix, Troglodytis) and marks Mt. Sinai to be in Arabia Felix, which at the time of Paul, included all of Saudi Arabia south of the Gulf of Aqaba including Midian.

a.       Josephus comments: “However, our admirable author Apion has before told us, that “they came to Judea in six days’ time;” and again, that “Moses went up to a mountain that lay between Egypt and Arabia, which was called Sinai, and was concealed there forty days, and that when he came down from thence he gave laws to the Jews.” But then, how was it possible for them to tarry forty days in a desert place where there was no water, and at the same time to pass all over the country between that and Judea in the six days?" (Josephus, Against Apion 2.25)

b.      It is important to realize that Apion made deliberate attempts at creating a false narrative about the exodus. In other words, if Apion placed Mt. Sinai in the Sinai Peninsula, we can be certain it is not located there. “This is that novel account which the Egyptian Apion gives us concerning the Jews’ departure out of Egypt, and is no better than a contrivance of his own. But why should we wonder at the lies he tells us about our forefathers, when he affirms them to be of Egyptian original, when he lies also about himself?” (Josephus, Against Apion 2.28)

2.      Arabia in the Old Testament was well defined to include Midian and east of the Arabah Valley where Edom lived. Arabia in the Bible was never considered as being in the Sinai Peninsula. 1 Chron 1:29-31 tells us that Kedar and Tema were sons of Ishmael who lived in Midian (Arabia). Dedan was associated with Arabia, Edom, Kedar, Tema in Jeremiah 25:23-24; 49:7-8. From a strict Bible definition, Arabia specifically excluded the Sinai Peninsula:

b.      Hagar and Ishmael lived in Shur, which is near Midian.

b.      Arabia in the Old Testament always means Saudi Arabia, without exception.

c.       At no point in history has the Sinai Peninsula been defined as Arabia Felix by any ancient geographer.

d.      At the time of Paul, the Sinai Peninsula was not defined as Arabia Petra by any ancient geographer.

e.      Only after AD 106 was the Sinai Peninsula annexed by Trajan and defined as Arabia Petra.