The Symbolic Language of Mt 24:29-30 is found in many Old Testament passages

The Symbolic Language of Mt 24:29-30 is found in many Old Testament passages

1.      Almost every person I have met who believes in the Rapture or premillennialism has almost no Bible knowledge. If they knew their Bible better, they would recognize that all the signs and symbols of Matthew 24 are used in the Old Testament of other destructions that have been fulfilled.

3.      Since Rapture promoters do not care to study their Bible much, they are completely unaware of this simple truth.

4.      For example, just as you cannot understand the book of revelation until you know where all the signs and symbols are used throughout the Old Testament, so too with Matthew 24.

5.      The expression “day of the Lord” is used countless times of a physical destruction upon Babylon, Egypt, Jerusalem in 620 BC. Rapture believers are totally ignorant to this simple truth and it is the reason why they are so wrong in their date setting and world outlook. 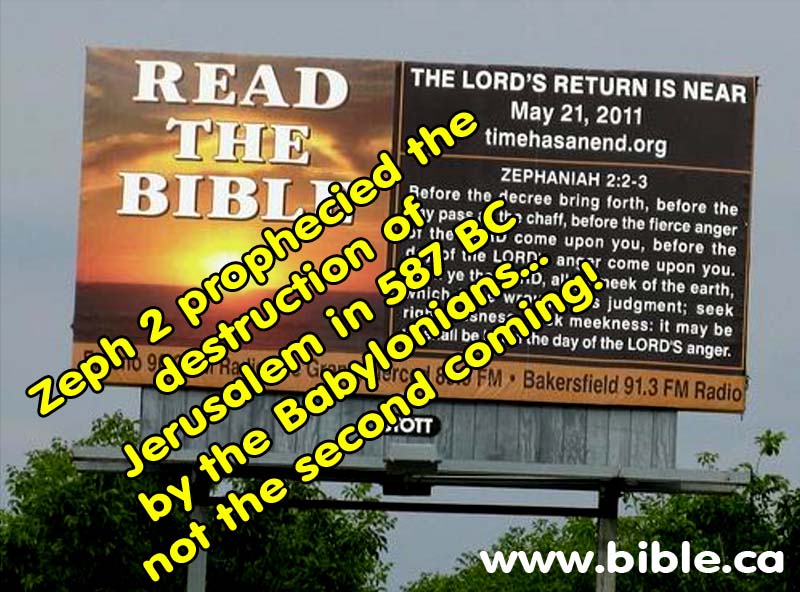 1.      Above is a billboard from Harold Camping when he was an agent of Satan to falsely predict May 21, 2011 as the Rapture because “the bible guarantees it”. Many people saw these billboards and when the end did not come, they lost faith in the Bible.

2.      Notice the use of Zechariah as a prediction of the end of the world.

3.      In fact, this Zephaniah wrote this as a prediction before the Babylonian destruction of Solomon’s temple in 587 BC.

4.      Rapture teachers and date setters ignore the obvious fulfillment of 587 AD and rip the passage out of context and apply it to the second coming today.

5.      To use Zephaniah as a proof text of the rapture, a doctrine that did not exist before 1830 AD is ignorance gone to seed and is a comedy of false doctrinal errors!

II. Why this document is critically important!

1.      So we can conclude that the language of Mt 24 is not referring to the second coming, but the destruction of Jerusalem in 70AD.

2.      It was 100% fulfilled prophecy! Such language is the way the prophets described, in prophetic language, the physical destruction of a specific nation.

3.      It has been applied to countless Old Testament nations that were destroyed.

5.      Interesting, we do find this same kind of language used in the New Testament to describe the second coming, but all of this is entirely outside the context of Mt 24.

We Speak truth in LOVE
“you are seeking to kill Me, a man who has told you the truth” John 8:40
tell us if we have misrepresented anything