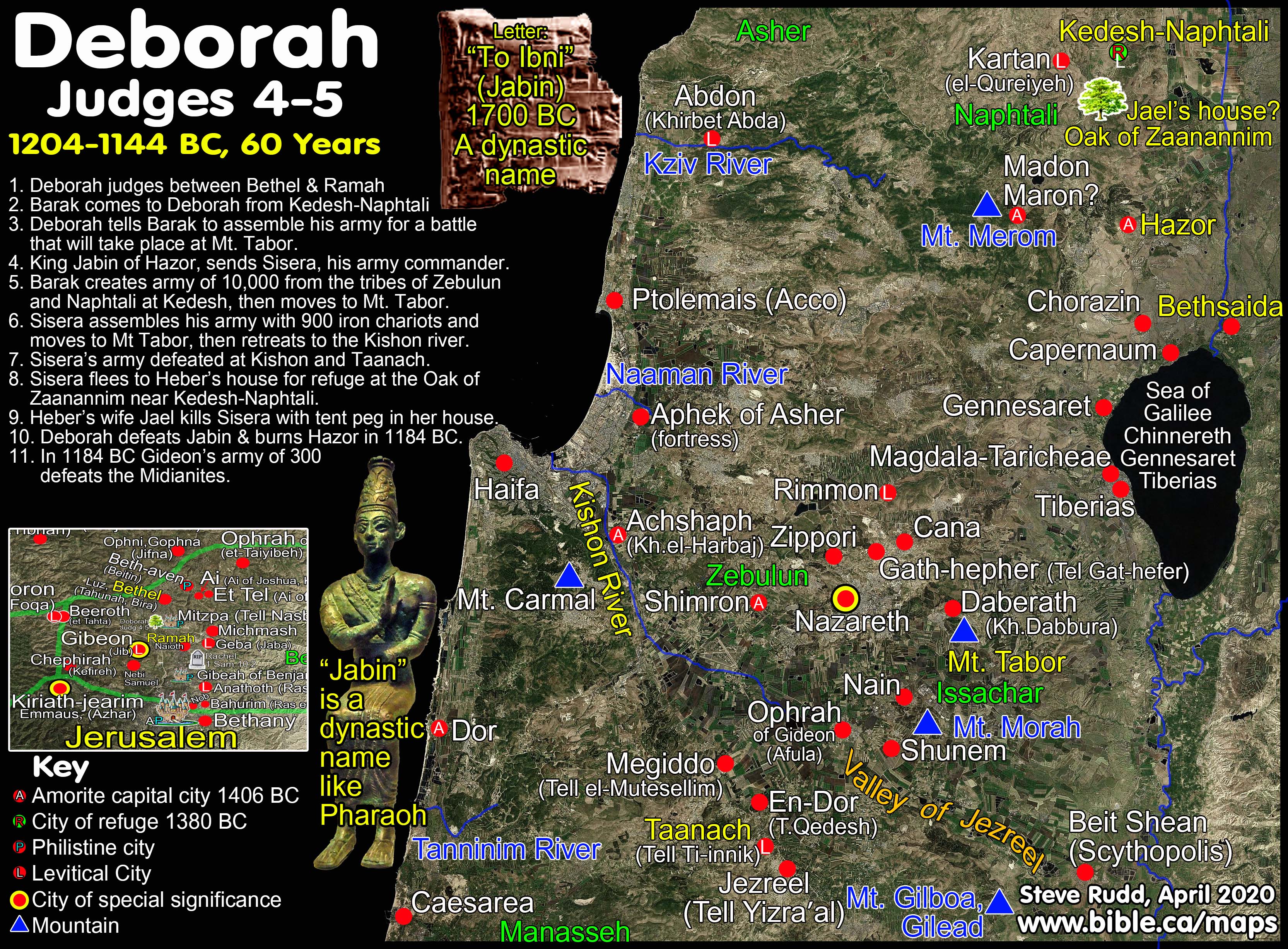 d.        Deborah was Judging Israel during these 20 years of oppression.

i.      In 1184 BC, Deborah liberated Israel at Mt. Tabor from Jabin, king of Hazor when Sisera was later killed while sleeping in a tent and Hazor was finally burned.

ii.      In 1184 BC, Gideon’s famous army of 300 defeated the Midianites and Amalekites at Mt. Gilead. Whereas Deborah was active during the 20 years of oppression, Gideon was only active one year in 1184 BC.

g.         During the 40 years of peace, the mass immigration of the Philistines in 1177 BC trigger the collapse of the Late Bronze Age in the 8th year of Pharaoh Ramesses III.

c.         Deborah tells Barak to assemble his army for a battle that will take place at Mt. Tabor.

f.          Sisera assembles his army with 900 iron chariots and moves to Mt Tabor, then retreats to the Kishon river.

h.        Sisera flees to Heber’s house for refuge at the Oak of Zaanannim near Kedesh-Naphtali.

I. Synchronisms between the Bible, Chronology and Archeology:

A.     Merneptah Stele in 1205 BC: Although not recorded in the Bible, the Merneptah Stele documents Egypt’s invasion of Israel in 1205 BC, precisely at the end of the 80 years of Peace under Ehud (1204 BC) and at the begging of the oppression of the Canaanites in Judges 4:3 from 1204-1184 BC. Notice that those who misdate the death of Joshua to 1384 BC (29 years too early), put the Merneptah Stele in 1205 BC directly inside the 40 years of peace under Deborah which started in 1213 BC. The Merneptah stele fits perfectly with high precision in the Judges chronology when you set the date of Joshua correctly at 1356 BC.

B.      Deborah burns Hazor in 1184 BC: Deborah burned Hazor in 1184 BC. Deborah’s final liberation act of burning Hazor was at the beginning of the 40 years of peace in 1184 BC. The 20 years of oppression under the Canaanites started in 120 and ended in 1184 BC. Those who misdate the death of Joshua to 1384 BC (29 years too early) make a double mistake in dating Deborah’s burning of Hazor. They misdate Deborah’s burning of Hazor to the beginning of the 20-year Canaanite oppression in 1204 BC rather than the end in 1184 BC. When you add these 20 misdated years to the 29-year error of when Joshua died, it is easy to see how their date for the burning of Hazor by Deborah in 1230 BC is a whopping 46 years too early.

C.      Deborah and Gideon concurrent 40 years of peace: A spectacular chronological discovery is that Deborah and Gideon delivered Israel from two different armies 30 km apart the same year. Deborah’s battle at Mt Tabor and Gideon’s army 30 km south at Mt Gilead happened the same year. We have a synchronism between Deborah and Gideon because their respective 40 years of peace of began in 1184 BC and end in 1144 BC. It was during these 40 years of peace that Philistines arrived in Judah in 1177 BC in 8th yr. of Ramesses III. Although Deborah is in Indivisible Chronology Unit #1 and Gideon is in Indivisible Chronology Unit #2 each defeated a different enemy of Israel the same year, using the same tribal armies of Zebulun and Naphtali. Both Deborah and Gideon completed their liberation the same year in 1184 BC. Deborah began to fight the king of Hazor in central Israel at Mt Tabor then the battled moved north to Hazor. Gideon’s famous army of 300 defeated the annual incursion of the Midianites and Amalekites at Mt. Gilead which is 30 km south of Deborah’s battle at Mt. Gilead. When the Midianites fled Transjordan, Gideon pursued them towards Amman and defeated them. This is confirmation that our approach is correct.

II. Jabin was a dynastic name like Pharaoh, not a surname:

a.       This was before archaeologists discovered three different references to the king of Hazar as “Jabin” spanning a period of 500 years between 1700-1200 BC.

b.      These inscriptions proved that Jabin was not the personal “last name” of a single man, but a dynastic name of a king like “Pharaoh”, “Caesar” and “President”.

c.       One again archaeology “slapped these Bible scoffers silly” into judgement and the Bible was proved to be right again!

c.             “Then Joshua turned back at that time, and captured Hazor and struck its king with the sword; for Hazor formerly was the head of all these kingdoms. They struck every person who was in it with the edge of the sword, utterly destroying them; there was no one left who breathed. And he burned Hazor with fire.” (Joshua 11:10–11)

d.            This proves the Bible was right all along and that "Jabin" is a dynastic name for a series of kings rather than the one time use of a single king. There were many Thutmoses pharoah's from the 18th dynasty and many Ramaases from the 12th dynasty. Now we know that the king of Hazor was the name of many kings who ruled in succession for over 500 years!

4.           A. King Jabin found in three different inscriptions: 1700-1200 BC: Archaeology now has uncovered a total of three different references to Jabin, in addition to the two Bible references to Jabin of Joshua (1406 BC) and Deborah (1200 BC). This proves the Bible was right all along and that "Jabin" is a dynastic name for a series of kings rather than the one time use of a single king.

b.      The Old Babylonian tablet letter from Hazor is actually addressed "To Ibni". (18-17th century BC)

a.       "Ibni (Jabin?), King of Hazor: Babylonian Tablet Confirms Biblical Name: The first reference to Jabin is the list of Canaanite placenames at the temple at Karnak contains the name Qishon of Jabin. A second reference to Jabin has now apparently been found at Hazor, where excavators discovered a fragment of a royal letter addressed “To Ibni,” a name similar in derivation to Jabin. Dating to the 18th–17th centuries B.C.E., this cuneiform fragment measures 1.18 by 1.06 inches and is written in Old Babylonian. The few phrases that survive record objections raised over the transfer of a young woman." (Exodus Itinerary Confirmed by Egyptian Evidence, Charles R. Krahmalkov, BAR 20:05, Sep/Oct 1994 AD)

b.      "Name of Jabin Found at Hazor: A fragment of a clay tablet addressed to Jabin, king of Hazor, was found this past summer in excavations at Hazor. Although the Jabin of the tablet is neither of the Jabins mentioned in the Bible, it attests to the fact that Jabin was a dynastic name at Hazor. The king of Hazor at the time of the Conquest in ca 1406 BC was named Jabin according to Joshua 11:1. In the days of Deborah and Barak, nearly 200 years later, the name of the king of Hazor was also Jabin (Jgs 4; Ps 83:9). This has been a problem to Biblical scholars. If Jabin was killed and his city burned by the Israelites at the time of the Conquest, how could Deborah and Barak battle Jabin king of Hazor nearly 200 years later? The solutions proposed by critics are numerous, but they all assume one thing: the Bible has things mixed up here and there must be a textual problem. The obvious solution is that there were two different kings with the same name. But scholars never consider that possibility; the Bible must be wrong, they assert. The carrying on of dynastic names was a common practice in antiquity and is well attested. The fact that there were 11 kings in Egypt with the name Ramesses is readily accepted by historians, but if there are two kings with the same name in the Bible, that becomes a major textual problem! Thanks to the discoveries of archaeology, it is now clear that the name Jabin at Hazor was a dynastic name used over many centuries. Rather than being a problem, the Bible’s use of this name for the kings of Hazor reflects an intimate knowledge of the politics of Canaan in the Late Bronze Age. The first extra-Biblical reference to a king named Jabin at Hazor was found at Mari. A text from the 18th century BC records shipments of tin from Mari to “Ibni-Addad king of Hazor.” The form of the name in this text is Accadian; the West Semitic form would be “Yabni-Haddad.” Biblical Jabin (Yabin) is simply a shortened form of this same name. The newly discovered second extra-Biblical reference to a king named Jabin at Hazor was a tablet found at Hazor, and is 2x2 cm (less than 1x1 in) and represents less than half the original. Written in Old Babylonian, and thus dated to the 18th-17th centuries BC, it is addressed to Ibni-Addu, king of Hazor. Again, the name Ibni corresponds to Jabin (Yabin) in the Bible. The letter was written by an appointee of the king and concerns the transfer of a woman from one place to another. Exhibiting a high-quality style and writing, the clay tablet unquestionably was a royal document executed by a skilled scribe." (Name of Jabin Found At Hazor, Bible and Spade 1992 AD)

c.       "After Thutmose III and well into the 19th Dynasty, expeditions to Nubia are mentioned frequently in the sources. Under a peaceful and efficient administration, the region prospered with the construction of irrigation works, the founding of new cities, and the erection of at least a dozen new temples, many of great size. The finest of the temples was built by Amenhotep III at Soleb; although reminiscent of his lovely temple at modern Luxor with its closed papyrus columns, it is sadly ruined today." (Ethiopia, The International Standard Bible Encyclopedia, Vol 2, p194, 1988 AD)